The biggest Audi SUV has received a facelift at the end of 2019 and some improvements were long-awaited by the four-silver-rings fans.
At first look, it finally received the octagon front-grill, which is already present on the Q8 and on most of the other Audi modern models. On the front bumper there is a new blade, which accentuates the sporty look of the massive SUV.

The 19” wheels are standard on the Q7 or 20” for the most powerful version, SQ7. The engines received a well awaited mild-hybrid version. This means that a new starter-generator driven by belt will help lower the fuel consumption with 0.7 l/100 km. Due to this new 48V mild-hybrid system, the start-stop function can work bellow 22 kph (13.6 mph). The most powerful version is the SQ7, which offers 435 HP. There is also a gasoline-hybrid version with a 3.0-liter V6 engine under the hood. This one has 340 HP and the electric system promises to offer a 43 km (26.7 miles) all-electric range.

Inside the cabin, the occupants should expect nothing than luxury and hi-tech. The new infotainment system allows multiple phone connections, Apple CarPlay and Android Auto. Of course, there are no dials on the instrument cluster. Only a big 12.3” LCD display, called Audi Virtual Cockpit and an optional head-up display. 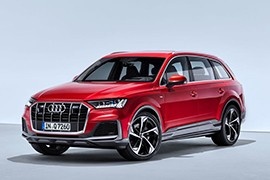