Despite all-new generation of the Audi RS5 Sportback being unveiled in 2018, Audi thought that it would be a good idea to refresh the entire RS5 model lineup just a year and a half later.
The early mid-cycle facelift is a minor one regarding the car’s overall design and technical areas, with Ingolstadt choosing to simply refine the model’s design language and bring it more in line with its more expensive Audi Sport stablemates.

The revamp also came at the right time to mark the quattro brand’s 25th anniversary, and the model was unveiled alongside its two-door brother, the Audi RS5 Coupe. Design wise, it’s difficult to pinpoint all the modifications, but almost every single exterior detail has been refreshed in one way or another. The large Singleframe grille is now even wider and looks flatter, while the non-functional vents above it hark back to the original Audi Sport quattro, which pretty much started the Audi Sport lineage. The facelifted RS5 Sportback has 40 mm (1.6 in) wider wheel arches, while the optional matrix LED headlights with laser light technology now feature darkened bezels. The model’s side sills and faux aerodynamic diffuser in the rear bumper have also been redesigned and can be further customized with gloss black, matte aluminum or even carbon fiber styling packages. Powering the car is the same 2.9-liter, twin-turbocharged V6 with 450 horsepower and 600 Nm (442.5 lb-ft) of torque on tap, sent to all four wheels through an eight-speed automatic transmission. 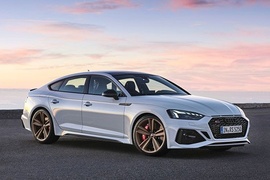