The fourth generation of the 6-Series Gran Turismo made a good impression in 2017 when it was introduced.
In 2020 BMW announced the facelifted version for it.

The facelift came into the challenging 2020 year with the world pandemic situation when all the countries faced economic difficulties. The 6-Series GT was more the successor of the 5-Series GT rather than the lines of the 6-Series, but following the new naming system from the German car-maker, it had to bear an even number. It was a 5-door hatchback in coupe-style.

Both front- and rear-end shapes were refined to reflect the BMW design language. The clear geometry formed by a small number of lines provided a vivid showcase for the car’s presence. The new kidney grille and headlights made a striking impression. The grille was wider and taller, maybe too big for the car’s front area. The LED headlights with matrix function and non-dazzling high beam were fitted as standard while the laserlight for both beams was offered as an option. The front and rear aprons were re-shaped with narrower and taller side-intakes at the front and integrated exhausts in the back.

Inside, the 6-Series GT offered enough room for up to five passengers and 600 liters (21.1 cu-ft) of trunk space. It was more than the non-facelifted version. The driving post was surrounded by the center stack and the center console, with a tilted touch-screen display placed on top of the dashboard. The instrument cluster featured a complete digital display.

BMW installed new Euro 6d engines under the 6-GT’s hood. All versions were fitted with the 8-speed ZF automatic transmission. It was available with a rear or all-wheel-drive. Power ranged between 190 hp for the base, inline-four, engine and was raised up to 340 hp for the inline-six turbodiesel unit. All versions were fitted with a mild-hybrid system. 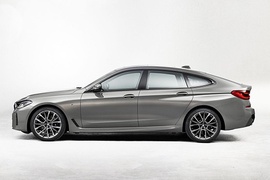