The first of its kind in the BMW 8 series range and for BMW in general, the all-new 8 Series Gran Coupe’s debut was littered with “sports car” references, with the Bavarians being absolutely positive regarding the model’s DNA.
The striking model is also the only four-door version of the 8 Series, which was only available as either a two-door coupe or a two-door convertible until the Gran Coupe.

The four-door model has a 3,023 mm wheelbase - an increase of 201 millimeters over the BMW 8-Series Coupe - and measures 5,082 millimeters in length (+ 231 mm), 1,932 millimeters in width (+ 30 mm) and 1,407 millimeters in height (+ 61 mm). The front track width of 1,627 mm is the same as on the two-door, while the rear track of 1,671 millimeters is 28 mm wider, making it the widest car in the BMW lineup. Engine wise, the 8 Series Gran Coupe was launched with four different versions, including a diesel model, but it’s possible that it will include more once the production ramps up. An M8 Gran Coupe is also in the cards, and is set to become the fastest four-door model that BMW has ever produced. 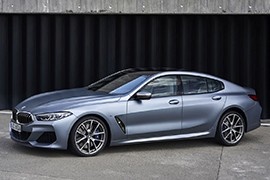