With a top speed of 300 mph (490.484 kph), this is not only the fastest Bugatti ever built, but also the fastest production car on the planet as of September 2019. The heavily modified Bugatti Chiron received a longer back and some extra power from the engine. Also, the “Longtail” back has an important role for aerodynamic efficiency.

Longer, meaner and more powerful, the Chiron Super Sport 300+ was specifically built for the 300 mph car title, and has taken the crown. Also, it is considered a production car, not a unique model, which makes the prize even more valuable.

The modified W16, 8-cylinder engine with four turbochargers develops 1578 hp. Since more internal components are carried-over from the Centodieci (110) model, the gearbox and transmission are the same, with an 8-speed automatic gearbox and all-wheel-drive. An interesting fact is that Bugatti made a record-run with the prototype at 304 mph, it then installed a 300 mph speed limiter for the production model.

Only 30 units will be made, with the first one having been sold right when the car was launched. The customer actually signed the papers on top of the first car’s roof. The launch of this new model was showcased with the occasion of the finale of the Grand Tour, a rally that payed an homage to Ettore Bugatti’s life, from Milan to Paris via Molsheim. The price tag is a staggering 3.5 million euro. 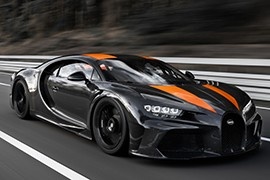