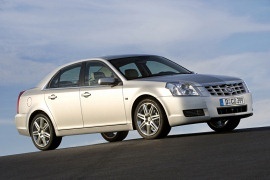 The 2006 Cadillac BLS is part of GM’s plan which consisted of numerous attempts at reintroducing the luxury brand in Europe.
The sedan is built on the GM Epsylon platform, which can also be found under the European Opel/Vauxhall Vectra and the Saab 9-3. A station wagon version was introduced about one year later, but it hasn’t been quite a best-seller.

The engine line-up is almost identical to the ones powering its European cousins. In Cadillac style, the BLS exterior is defined by angular flat, angular shapes garnished with amenities like jewel-like headlamps, a wide air intake under the front grille, narrow chrome strips at the base of the windows, and an LED center brake lamp. The interior comes with leather upholstery, analog clock on the center console, powerful infotainment system, DVD navigation, touchscreen and multiple connectivity.

In terms of safety, the BLS had 6 airbags as standard, active headrests and pyrotechnic seatbelts. The luggage space was 425 liters (just like for the SAAB). The car came in 5 trim levels: Standard, Elegance, Luxury, SE and Sport Luxury.
The interior was equipped with quality materials and was roomy enough to feel comfortable over long distances.
The car was available with 5 engines, 2 diesel and 2 gasoline. The top engine was the 2.8-liter V6 which developed 255 hp.