Cadillac dropped two bombs in February 2021 with a pair of track-ready sedans determined to steal the Germans’ performance premium crowns.
The CT4-Blackwing was the supped-up Caddillac that all the younger generation still attracted to performance vehicles should try. The American premium carmaker threw its punches to the BMW 3-Series and the Mercedes-Benz C-Class when it introduced a high-performance sports sedan available with a Tremec 6-speed manual twin-discs. Thus, the officials said, the driver won’t burn the clutch. Its magnetic ride control and the electronically controlled rear LSD were tuned for daily drives to the grocery store or track performance.

There were a few differences from the outside on the CT4-Blackwing compared to the regular CT4. It looked sportier and meaner. Its dagger-like daytime running lights with LEDs were spread from top to bottom of the front fascia. Between them, a mesh-grille with carbon-fiber elements on the top enhanced the sporty look. From its sides, through the 18” light-alloy-wheels, the massive 380 mm (14.96”) disc brakes confirmed the car’s sporty designation. A carbon-fiber aerodynamic kit was offered as an option and completed the look with a wing spoiler and a diffuser in the back of the car.

Inside, apart from the sport bucket seats, the carmaker added more carbon-fiber trims on the door panels and the center console. A TFT display replaced the analog dials but kept a traditional look for the tachometer, which was placed in the middle.

From the technological point of view, the CT4-Blackwing featured a twin-turbo V6 engine that provided 472 hp and 640 Nm (472 lb-ft) of torque sent to the rear wheels via a standard 6-speed manual or a 10-speed automatic. Cadillac took an intriguing decision to fit titanium connecting rods for the engines paired to a manual gearbox. 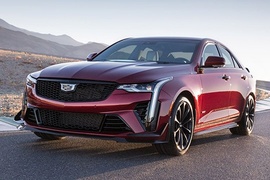