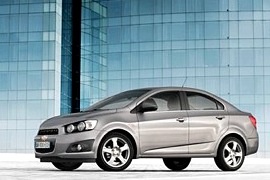 The small sedan from Chevrolet was the last try of the American brand to conquer Europe.
It represents the farewell to the old Daewoo platform and, in 2011, with a new design, the Aveo meant business.

The sedan version was a good offer for the East European market, where three-box vehicles are preferred. The budget cars were blooming and the economy was recovering after the world financial crisis. The four-door saloon was offering decent features and decent room for five adults and a separate trunk. The 2011 Aveo didn’t have anything in common with the older one. More aggressive styling was adopted and, on the upper trim levels, it offered light-alloy-wheels.

The engine range was ranging from a small, gasoline, fuel-efficient 1.2-liter unit that offered 75 hp or 86 hp, respectively. The top gasoline version was a 1.6-liter that offered 115 hp, which was not bad for a light small car. A 1.3-liter turbo-diesel version was available with two power options.

The interior materials were according to its class and price budget. Standard options were the AC, central locking and a stereo. The trunk was huge, with its 502 liters (17.7 cu-ft). The option list was generous, and an automatic transmission was available too.

But the car didn’t survive the market. It was too expensive as a base model and, with more options, had a sticker price higher than its competition. 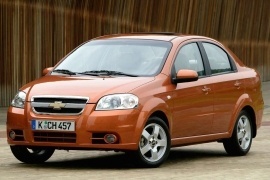 The second generation Aveo was introduced by GM during the Auto Shanghai 2005.
The new sedan was based on the all-new T250 platform and was designed in-house by GM, in cooperation with PATAC. The model was initially introduced in South Korea as the Daewoo Gentra and featured a new exterior look and restyled interior. The model was later introduced for the North American market at the 2006 Greater Los Angeles Auto Show. A restyled version of the Aveo sedan was introduced at the 2007 Frankfurt Motor Show (for US and European markets). The South Korean counterpart of the Aveo, the Gentra, also received a facelift in 2007, badged as the Gentra X. 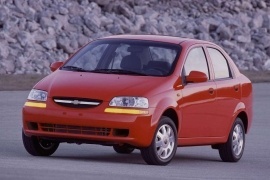 After purchasing the Daewoo remains, GM found a pile of blueprints and plans for several cars, including a small-segment vehicle, the Aveo/Kalos.
Chevrolet needed a low-budged vehicle, required not only by car-rental companies but also by private customers. The Aveo came in the right moment at the right time, at least for some countries. In the U.S., the small sedan was good in heavy traffic, had an impressive fuel efficiency, and the performance of a donkey in full rage.

TheAveo’s rounded shapes, with straight lines for the front turn signals and headlights, showed a mix between a bio-design and a new-edge-design concept. The smiling grille sported a horizontal slat where Chevrolet placed the bow-tie badge small enough to be almost unnoticeable. A sculptured line went down on the door panels on the sides, while in the back, the tall trunk looked like it was added after the hatchback was already built. And that’s exactly what happened since the original design was for the five-door hatchback, not for the sedan.

Inside, the Aveo was built with low-budget materials. It featured cranked windows and no AC nor stereo for the base trim level. Usually, the customers bought the more expensive versions. At the front, the tall seating position made the taller driver brush their hair with the car’s ceiling, while the rear passengers had minimal legroom, shoulder room, elbow room, or headroom. At least the trunk was big enough to fit four medium-sized luggage inside it.

Under the hood, Chevrolet installed a range of six engines, depending on the market. It offered a five-speed manual transmission for the entire range.