The ninth generation of the Chevrolet Malibu was introduced in 2015 at the New York Motor Show and it was updated in 2018 for the 2019 model year.
Chevrolet did badge engineering since forever. In Europe, Opel and Vauxhall are one example. It was the same situation with other cars that crossed the Atlantic and received different names. One good example was the 2015 Malibu, which was an Opel Insignia with some aesthetical and technical improvements.

The facelifted version featured a new front fascia. The Chevrolet bow-tie was installed on a new chrome bar. A bigger lower grille was installed on the 2019 Malibu. A new signature LED lights for the DRL was installed in the front apron. The headlights were available with LED technology as well. The back of the car was slightly changed, but not significant for the LS trim level, but different for the LT, which featured LED taillamps. There was a new set of 18” light-alloy wheels fitted on the new RS trim level, which offered a sportier look.

Inside, the new 8” touch-screen was fitted as standard for the entire range. Another comfort feature that was changed was the access in the cabin. The 2019 Malibu, in LS trim, didn’t feature unlock buttons on the exterior door handles. 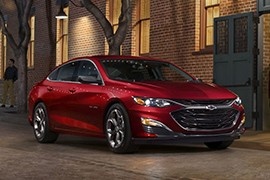