The Chevrolet Sonic released in 2015 was designed to replace the Aveo.
It was available as a sedan or a hathback, both models having quite a nice look.

The Sonic was inspired by motorcycle styling, fact to be noticed at the headlights’ design, as well as the center console inside the cabin.

Even though the Sonic was a budget car, it drove well, the fuel consumption was reduced and even came with a 6-speed automatic transmission. The cabin was well isolated, offering a pleasant long trip.

The Chevrolet Sonic was give a 5-star rating by the National Highway Safety Administration – a top safety pick award. It was equipped with blind spot mirrors and an optional crash avoidance system. Ten airbags were part of the standard equipment.

The car’s price started at $14.000 and we think the Sonic was more of a bargain sporty sedan. It was equipped with a base 1.8-liter engine developing 138 hp or a more efficient engine choice, a 1.4-liter naturally aspirated turbocharged engine.

An sportier version of the Sonic was also brought to the public under the nameplate of Sonic RS – hatchback version only – a vehicle that featured a lowered suspension, redesigned exhaust, a nice flat-bottomed steering wheel and sport seats as well. 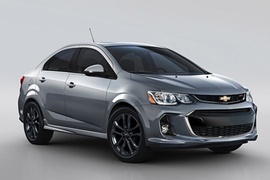