The Romanian brand Dacia unveiled the third generation of the Logan range at the end of September 2020.
It was a complete makeover of the low-budget car.

The Romanian car-company Dacia was part of the Renault Group when it introduced the Logan lineup’s first generation. That car was built mainly for the Romanians and East Europeans with a base price lower than a set of light-alloy wheels from Rolls-Royce. Its exterior design was not a concern for the customers. The second generation started to look better, but the 2020 model brought more appeal to it.

A completely new design, with bold headlights that incorporated the LED daytime running lights, a hexagonal 3D grille, and an A-shaped lower grille in the apron, made the car look aggressive. The wheel-arches were wider than the rest of the bodywork, and the sculptured door panels looked better than before when they were just slightly curved. Due to the sloped rear windscreen and the higher trunk area, it seemed like the greenhouse was shorter.

The interior design team worked hard and brought smart solutions for the customers. On top of the dashboard, smartphone support with a lid on top of the dashboard plus a USB connection transformed the driver’s personal mobile phone into a media control unit. The top of the range version featured a Media Nav system with wireless integration for Apple CarPlay and Android Auto. Due to the longer wheelbase than its predecessor, the Logan offered more legroom for the rear passengers.

At the time of its launch, the Logan was available with a choice of three engines. The base version featured a 1-liter, three-cylinder unit. A turbocharged 1-liter unit powered the mid-level, and the top version was the 1.0-liter bi-fuel (gasoline-LPG) engine that developed 100 hp. 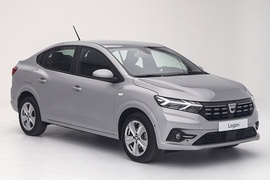