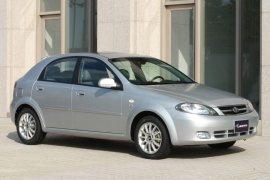 It was one of the last models developed and launched by the Korean carmaker before it was shut down due to financial problems.
In some markets, the Daewoo Lacetti is available as Chevrolet, Buick, or even Holden, after GM bought the Korean brand’s remains in late 2008. Daewoo used high-strength steel, dual front airbags, and an additional two side airbags for the 1.6-liter engine from the safety point of view.

The hatchback design was signed by Giorgetto Giugiaro and offered a similar front fascia as the sedan. Behind the C-pillars, the car was ended with a shorter overhang. The Lacetti was based on the Daewoo Nubira platform.

The cabin was large enough for five adults but not exactly comfortable. For in-car entertainment, Daewoo offers a classical radio-cassette player but has also added a 5-CD changer for the upper trim levels. The air conditioning system was offered as a standard feature for the vehicle. For some countries, the base model featured cranked rear windows, while the upper trim levels were fitted with power windows and locks and alloy-wheels.

The compact Daewoo Lacetti came with the right options at the right time on the market in 2002. The car was cheap to buy and run and featured two engine choices: a 1.4-liter and a 1.6 liter with 93 and 109 hp, respectively. Its performance was average for that segment, especially for its price. Daewoo offered a 4-speed automatic transmission for the latter powerplant, while the standard offer was a five-speed manual gearbox.