Ferrari doesn’t mess too much about mid-life cycle facelifts.
It changes the model that much that it can be renamed. For instance, how many know that the 430 was actually a facelifted 360? So, in 2014 the FF model was replaced by the GTC4Lusso. The only body part that was kept from the FF was the windshield. Everything else was changed.

Inside, Ferrari showed that it ditched the 2000’s look and adopted a modern approach. It looks like there are two cockpits separated by a large central console, defined by the air-vents.

The GTC4Lusso has an HD 10.25-inch touchscreen, a 1.5 GHz CPU and the sort of responsive, interactive usability a lot of cars could only dream about. It’s also nice how Ferrari has designed the dashboard to wrap around it so it’s fully integrated rather than stand-proud. And, most important, the passenger next to the driver has its own display dedicated to the audio system. Think like the driver has a personal DJ on the road.

Finally, the tech upgrade is huge and it starts with a 7-speed dual-clutch gearbox, dual-coil adaptive dampers and the 9th generation ESP. The AWD system was upgraded too. Last, but not least, the four-wheel steering is new and brings more handling in the parking lot. Since it is a 4.9-meter (16 ft) long vehicle, it is a feature more than welcome. 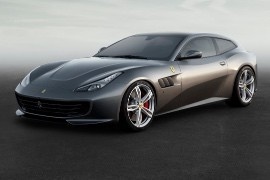