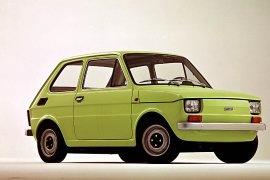 The first generation of the Fiat 500 was produced for almost 18 years and when Fiat decided that it was time for a new model, they released the Fiat 126 in 1972.
The mini car was presented at the Turin Auto Show. As the car was produced in Poland, at Bielsko-Biala, the car was named the Polski Fiat.

The Fiat 126 was pretty much the same Fiat 500 when it came to the wheelbase and the mechanical underpinnings, however, the bodyshell was all new. The car was still a 4-passenger, rear- engined city car.

The car’s price was relatively low and it became Poland’s most popular car in the 80’s. Being a successful model, Fiat kept upgrading it over the years and thus its production lasted until 2000.

The first upgrades included new brakes, new wheels and with the new lightning requirements came the hazard warning lights.
In 1984 the car was refreshed and the facelifted version was named the Fiat 126p FL – the upgrades included a reverse and a fog rear light added to the plastic bumper, as well as an electronic ignition system. Another facelifted version was introduced in 1994 using some parts from the already released Fiat Cinquecento.