The best selling vehicle in the U.S., after 34 years in a row is the Ford F150. In the half-ton pickup, the F-150 is the all-around vehicle, from the hard-working truck to the car for a date.

The secret of the F-150’s success is Ford’s refusal to rest on its glory. In 2011, the company refreshed the F150’s engine and transmission to include a twin-turbocharged V6. The half-ton truck received more improvements in interior comfort and off-road ability. For instance, the rear axle received a locking differential instead of the limited-slip type as it was used before. A new feature was added for the Hill Start Assist, which was offered as an option before but since 2012 it became standard. A new two-speed automatic 4x4 system was added from the Lariat trim levels and up.

The 2012 F-150 was offered in three body variants: regular cab, SuperCab, and SuperCrew. The Regular Cab features a front-facing rear smaller door that provides access behind the seats. Either if there is a bench-seat or bucket-seats, there is some storage space in the back. That space it is great for a toolbox. Or a shotgun, whatever works.

Between the dials on the instrument cluster, a new 4.2” display showed information for the on-board computer, fuel economy, range, average speed or information about the 4x4 system, if fitted. There are 10 trim levels on the F-150, and apart from the base, XT model, Ford offers the SYNC infotainment system that supported iPod connectivity, Bluetooth connectivity with the mobile phone. 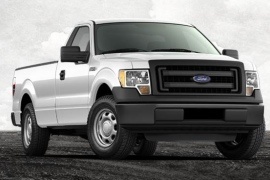