The all-new, most powerful naturally aspirated Mustang Shelby GT350 broke cover on the Internet just before the 2014 Los Angeles Auto Show.
It was the car that broke the 100 hp/liter barrier for naturally aspirated Ford engines. The 5.2-liter unit offered 533 hp and 581 Nm (429 lb-ft) of torque. It was mated exclusively with a 6-speed manual.

The look was different than the rest of the Mustangs. The front fascia was completely different. Ford installed different front fenders, a bigger bumper, and larger ai-scoops. The car featured MagneRide adaptive dampers and the whole vehicle was stiffer by 26 percent compared to a regular Mustang. It could be ordered in different trim levels and one was for the hard-core enthusiast who would have to take it to the racetrack. The R-version didn’t have an AC-unit and not even a radio. What it has was carbon-fiber wheels, reinforcement brackets between the shock-absorbers towers and only two seats. The rear ones were removed.

Performance-wise, the Shelby GT350 was a masterpiece of its creator. The 0 to 100 kph (0-62 mph) sprint was obtained in 4.4 seconds and the top speed was close to 250 kph (155 mph). But the most important part of the game was that it was very fast on the track, not only on straight-line acceleration. 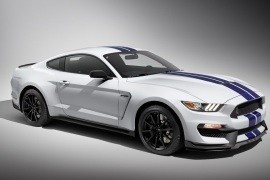