Jeep introduced the fifth generation of the Grand Cherokee lineup in 2021, and it proved worthy of its nameplate but added more luxurious and advanced technological solutions.
After seven million units sold, the Grand Cherokee was already a respected and worldwide known product. Ever since its first generation, in 1992, it offered great off-road performance and a comfortable interior. Over the years, the American SUV became more and more luxurious and proved to be performant on highways too.

The 2021 Grand Cherokee was so well designed that it even didn’t need a badge to recognize its brand and nameplate. Its seven vertical slats at the front were a distinctive sign for the Jeep brand, while its narrow headlights and fat bumper made a connection with its predecessors in terms of design. Jeep built the vehicle on the same platform used by the Stellantis group for the Alfa Romeo Stelvio. The designers managed to create a lower roofline for a sleeker appearance. The raked-forward C-pillars remained a clear characteristic for the Grand Cherokee.

While the first generation of the Grand Cherokee sported a spartan interior with just a few amenities, the 2021 model could compete in the luxury segment thanks to the use of leather, high-tech, and comfort features. I provided 144.6 cu-ft (4,096 liters) of interior space for the cabin. When the rear, split-folding bench was lowered, it allowed a trunk increase of up to 37.7 cu-ft (1,067 liters). For the front occupants, Jeep installed a Uconnect infotainment system with up to three 10.1” screens.

From the technical point of view, the most technologically advanced powertrain was the 4xe version. It featured a hybrid powerplant that combined a turbocharged inline-four and an electric motor mated to an eight-speed automatic transmission. 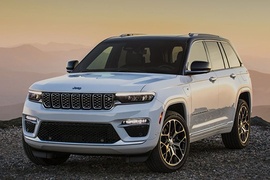