Kia introduced the fourth generation of the Optima in 2016, and just two years later, the carmaker introduced a facelifted version at the 2018 Geneva Motor Show.
The Korean carmaker was on the verge of improving its products and relentlessly worked on its models. By the time the first 2016 Optima was sold, the designers and engineers worked double-time to introduce a new version in 2018, and they made it.

Imagined as a sporty-sedan, the Optima received a station-wagon brother, which was named Sportswagon. It shared the same front fascia with its three-door sibling that showed the new “tiger-nose” design language on the grille. In the back, the car sported a sloped tailgate and a diffuser under the bumper.

Inside, Kia installed a German-inspired dashboard design with an integrated infotainment screen. Its high center console split the front area into two separate clusters for the driver and its side passenger. The high-bolstered bucket seats confirmed that the car was made more for spirited driving rather than relaxed ones. There was room for three adult-sized passengers in the rear, thanks to the very low center tunnel that made the floor look almost flat.

Under the hood, Kia installed three gasoline, one diesel, and one hybrid powerplant, paired with a 6-speed manual or a 7-speed automatic (dual-clutch). 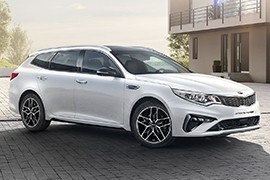