Unlike its two predecessors, the latest generation of the Kia Pro_cee’d has switched segments entirely.
On the first two tries, Pro_cee’d was simply the name of a sportier, three-door version of the five-door Cee’d. Starting with 2018, the Kia Pro_cee’d is firstly less confusing to spell, since it’s Proceed now. Secondly, the car is now a five-door shooting brake model akin to the Mercedes-Benz CLA Shooting Brake, which may not get a replacement once the current generation stops being made.

Designed by Peter Schreyer, know for the first-generation Audi TT and now Kia’s design boss, the new Proceed will confusingly co-exist with a regular station wagon version of the Ceed. Having a sportier nature thanks to the very different exterior design will definitely help it in the long run, though. In the beginning, the engine lineup will consist of a single diesel, 1.6-liter CRDI with 136 HP, while on the gasoline front customers will be able to choose between a 1.0-liter with 120 HP, a 1.4-liter with 140 HP and a 1.6-liter with 204 horsepower, borrowed from the Ceed GT. 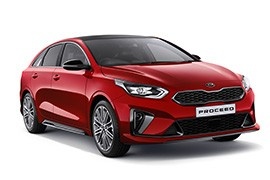