After getting into an argument with Enzo Ferrari, Ferruccio Lamborghini started its car company with one aim: to beat the Ferrari at its own game.
The first car it built was the 350 GT, a vehicle with a large engine at the front, a luxurious cabin designed for four adults, and a trunk large enough to fit enough luggage for a pleasure trip over Europe. But the result was controversial, and some customers complained about the car’s design. Lamborghini looked at the car and thought that the 350 GT could be more appealing in a roadster shape. And that’s how the GTS was born. But the problem was not the roof; it was the headlights. That said, the Italian carmaker ended up building only two rag-top 350 GTS vehicles.

Its young company didn’t exactly know how to build a convertible, so Lamborghini trusted the more experienced Carozzeria Touring to design and build the cars. The coach-builder showcased the vehicles at the 1965 Turin Show Car. They shared the same body panels with the GT version but featured only two seats. Instead of the rear bench, the coach-builder made room for the retractable roof and covered it with a metallic panel.

Under the hood, the 350 GTS featured the same 3.9-liter V12 as the GT version. Six twin-barrel Webber carburetors fed it. The result was astonishing for those times. It could run the quarter-mile in just 15.5 seconds, and its top speed was close to 250 kph (155 mph). 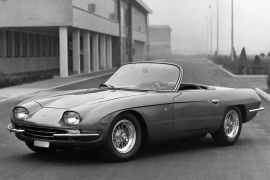