Some of the boys who had the Countach posters on their walls grew up and in 2016 they could afford the true offspring of that supercar.
And that was the 2016 Lamborghini Aventador SV LP750-4.

The Y shapes were everywhere present on the supercar. On the short trunk lid upfront, on the fenders, on the 3D front spoiler, and the LED taillights. The angry headlights were full LED and the fixed carbon-fiber wing in the back meant business.

Sometimes, a special edition of a supercar is just some nicer wheels and special colors. Not the case for the SV LP-750-4. The name said it all: 750 hp and all-wheel-drive. The SV meant Superveloce that can be translated in Superfast. To live up to that name, the Lamborghini engineers added 50 more hp to the Aventador and shaved 50 kg (110 lbs) from its weight. It wasn’t only a diet, but a training program. While the removal of the ALA (Lamborghini Active Aerodynamic) cut some weight, then added some kilos in the form of adaptive steering and the magnetorheological dampers. That’s where most of the USD 100.000 price difference was spent. The 600 units were produced and sold by July 2017.

As a result, the car was incredibly fast. On the Nurburgring Nordschleife race track, it ran a little bit slower than the USD 1.000.000 Porsche 918 hybrid supercar. 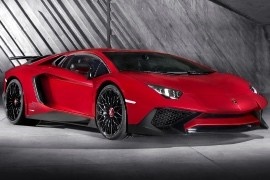