Lincoln first offered the Aviator nameplate on a large three-row SUV back in the early 2000s, but the model’s lack of success saw it being taken out of production after less than four years on the market.
More than a decade later, Lincoln realized that it’s so infatuated with the Aviator moniker that it developed a brand new SUV to wear it once more. Just like its predecessor, the all-new Aviator is a mid-sized three-row SUV that sits right under the Navigator in the Lincoln modern SUV lineup.

While naturally aspirated V8s were a commonality on American mid-size and full-size SUVs in the early 2000s, the second-generation Lincoln Aviator has an engine lineup that only comprises twin-turbocharged six-cylinders. The entry level model is powered by a twin-turbocharged 3.0-liter V6 with 400 horsepower and 400 lb-ft of torque, sent to all four wheels through a 10-speed automatic transmission developed in-house by Ford. The top of the range model is a plug-in hybrid version that gets its own nomenclature (Aviator Grand Touring), and comes with 450 horsepower and no less than 600 lb-ft of torque while using a lot less fuel than the standard model. While the model’s exterior follows the same design language as its bigger brother, the Navigator, but with more aeronautical influences, the interior has its own style. 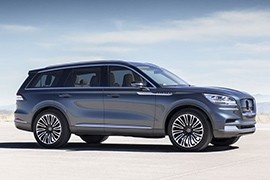