Mahindra launched the Bolero in 2001, and its rugged construction helped it gain an important part of the market.
One decade later, the Indian carmaker improved the car.

Mahindra & Mahindra was a big carmaker, especially known for its off-road vehicles. The Bolero was one of the vehicles of choice used by the Indian Police and armed forces. The simple body-on-frame construction and simple engineering solutions made it suitable for hard situations.

From the outside, the Bolero featured a boxy-looking design, with flat door panels and fenders. The entire vehicle looked like it was built from flat sheets of plywood. The 2011 model featured new headlights, which looked more aggressive and wide. On the bumper, the designer installed two fog-lights, which were available on upper trim levels. From its sides, the exposed door-hinges looked rough.

The interior was surprisingly roomy for a 4.1 meter (13.47 ft) vehicle. It could accommodate up to seven passengers inside, with two jump-seats in the trunk. A simple dashboard with a handle for the front passenger and a digital panel inside the instrument cluster offered enough information for the driver. In the center stack, the designers embed the center vents and an aftermarket-looking CD-radio.

Under the hood, Mahindra installed a diesel engine. It was naturally aspirated and offered a mere 63 hp from a 2.5-liter displacement but offered a start-stop system to save fuel. The only gearbox available was a 5-speed manual. 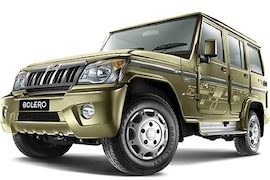