The British supercar builder McLaren had built a new track-focused, still road-legal supercar, the 765LT.
Does this resemble the 90s’ F1 GTR? Sure does.

Where from the nameplate of 765LT? First of all, the 4.0-liter V8 engine developed 765 hp. Second of all? It was the exact number of units produced. Quite unique!

The 765LT was more likely an upgraded version of the previous McLaren 720S. And by upgrading, i mean weight reduction, thus power increase. The sports car could rocket to 100 kmph in only 2.8 seconds and reached a top speed of 330 km/h.
The supercar weighed only 1339 kg and measured 4.6 meters long and 2.2 meters wide. How did McLaren manage to create such a lightweight vehicle? Wherever possible, they used lightweight materials – the chassis contained components made of carbon-fiber, as well as the front and the rear bumper, the front floor, etc. .

Compared to its predecessor, the 2020 model came with a new aero package that offered around 25% more downforce.

The visual differences were few, such as new 10-spoke alloys, that were lighter by 22 kg, a new front bumper and a redesgined, more aggresive rear diffuser.
The interior was fitted with an Alcantara wrapped steering wheel and dashboard.

Customers could choose between 17 exterios colors, however, completely bespoke paint schemes were available. 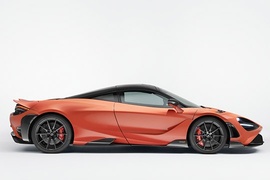