As a tribute to one of the greatest racing drivers in the world, Ayrton Senna, McLaren launched a special edition in 2018.
It was lighter, faster and more expensive than any other McLaren to that moment.

The Senna was the next step in McLaren’s Ultimate Series range. It sat above the Super Series (720S) and Sport Series (540 and 570) models. It was not a replacement for the P1, but it was designed to set new standards in track performance. Only 500 units were made.

The look of the vehicle was a form that followed function, but without compromising the look. It was aerodynamically efficient, with an aggressive look due to its large air-intakes on the front and the streamlined headlights. On top of the vehicle, there was another air-intake for the engine. Further air-extracting vents behind the wheels and more air-scoops were placed where they were needed.

Inside, there was a combination of carbon-fiber and Alcantara that covered all the interior. Some aluminum elements around the air-vents and chromed buttons on the infotainment display completed the overall image of a radical sports car.

The 1198 kg (2641,13 lbs) vehicle was the lightest McLaren since the iconic F1, which was 60 kg (132 lbs) lighter. The 4.0-liter engine was boosted by a pair of twin-scroll turbochargers offered 800 hp and it was mated to a standard seven-speed, dual-clutch automatic gearbox. For the suspension, was race-derived, to offer the best possible handling and to develop high cornering speeds. 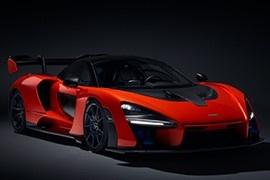