Mercedes-Benz introduced Citan’s second generation in 2021, and, like its predecessor, it was based on the same platform as the Renault Kangoo.
But the biggest news was that it was the last new van designed with an internal combustion engine for the German brand. After that, all new models were designed for electric motors.

Like its predecessor, the 2021 Citan was available either as a panel van or passenger vehicle. They both shared the same front fascia with a three-slat grille and swept-back headlights. On the lower side of the bumper, the carmaker installed a wide, black grille that contained the optional fog lights. On the sides, the MPV was available with two doors at the front and up to two sliding ones for the rear passengers or to access the cargo area. The van-version received a pair of unequal side-hinged doors in the back while the passenger version got a tailgate.

Moving inside, the customers will discover some bits and pieces from the Citan’s French cousin, but the overall appearance was clearly inspired by other Mercedes-Benz vehicles. The passenger seat could fold down flat for the van version, thus extending the loading length through the 90 degrees swiveling wall that divided the cabin from the cargo area. In addition, the passenger version got a 1/3-2/3 split-folding bench. Thus, the vehicle could have been used as a utility vehicle for the week and as a family van for the weekend.

Under the hood, the German carmaker installed a small choice of engines, either gasoline or diesel. The car featured either a six-speed manual or a seven-speed automatic (dual-clutch) gearbox, depending on the options. 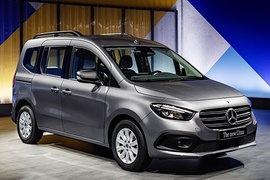