The Pullman version of any Mercedes-Benz was the exclusive version for the top of the range model offered by the German car-maker.
But when the Maybach name was added, it meant even more.

The Maybach was a German brand that used to build engines for the Zeppelin airships and between the two World Wars, it built very exclusive cars with custom bodyworks. Mercedes-Benz tried to revive the name in 2002 with the Maybach 57 and Maybach 62 models, but that didn’t work. In 2018, Mercedes-Benz came up with the idea of introducing the Maybach name as a trim level. It was the top model range for the S-Class. By combining the Maybach with the Pullman, the result was an even more exclusive car: the Mercedes-Benz S650 Pullman Maybach.

With one meter (39.4”) added to the wheelbase, the car was the longest Mercedes-Benz S-Class on the market. The rear doors were considerably larger than the regular, or even the long-wheelbase, model. The V12 badges on the front fenders resembled the V12 engine built by Maybach for the Zeppelin airships.

Inside, the driver got the same dashboard as in an S-Class Maybach, with two wide screens and leather upholstery on the panel. Between the driver and the rear passengers, there was a privacy panel, which could have been risen or lowered by the rear seat occupants. The rear seats were designed as in a Business Class airplane. The reclining individual seats, with a champagne fridge between them, TV and LCD on the front folding seats, and all the privacy curtains on all windows. 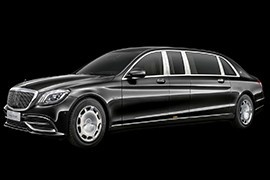