After 19022 units produced from the SL55 AMG between 2001 and 2006, the facelift brought major improvements to enhance the car’s look and performances.
The SL55 AMG was the most powerful car that left the Mercedes-Benz factory lane in 2001 when it was introduced on the market. Meanwhile, the SL65 was introduced to the market with even more power. Still, the customers considered that the SL55 was a better choice.

The revisions for the 2006 SL55 AMG brought a new grille, inspired by the SL65 AMG. The front bumper was redesigned and looked more aggressive than before. Due to its involvement in the Formula 1 Championship, the German car-maker decided to offer an aerodynamic package that was F1 inspired on the front splitter and the side sills.

Inside, there was a new steering wheel and new options available, including the heated and ventilated seats, adaptive cruise control and a push-button start on top of the gearbox stick. The driver didn’t need to place the key in the dashboard to start the car.

Most of the major changes were made to the technical part of the car. The front disc-brakes were carried-over from the SL65 AMG. They were bigger and with 6-pot calipers instead of the older 8-pot units. The engine was re-tuned and received a new compressor, along with a bypass, that allowed the car to run as a naturally aspirated engine. For the 2006 model, Mercedes-Benz decided to keep the old and reliable 5G-Tronic gearbox. 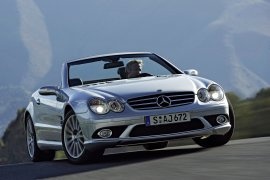