The 1938 model of the W142 Typ 320 was the last evolution over the model 290.
It featured improvements for comfort and high-speed efficiency.

The Typ 320 featured a 3.2-liter engine in the beginning, in February 1937 when it was shown at the International Automobile and Motorcycle Exhibition in Berlin. With it, the brand closed a gap in the market between medium-sized vehicles and vehicles of the largest format. The four-door version with streamlined bodywork was suspected to be designed by Spohn, one of the most prolific aerodynamically-shaped bodywork builders in the era.

The initial 3.2-liter engine featured 12 counter-weights for the crankshaft, to reduce engine vibrations. The solution worked and the engine ran smoothly. The former updraught carburetor was replaced by two downdraught carburetors. The previously used 4-speed transmission with overdrive function (it was, actually a three-speed gearbox), was replaced by a fully synchronized 4-speed gearbox supplied by ZF company. The fourth gear had a 1:1 gear ratio, which made the engine ran 26% lower than the previous version, at the same speed. That made the Typ 32 W142 IV faster and with a better fuel-efficiency. In late 1938, due to the shortage of high-octane fuel, the engine displacement was increased to 3.4-liter, in order to keep the same 78 hp.

The chassis featured an independent front suspension with a transverse leaf spring. At the top, the wheel was attached to a suspension arm that rested on a helical spring on the inside. The rear dual-joint swing axle had two helical springs on each side, one behind the other. Dual-action hydraulic lever-type dampers were installed on both front and rear axles. 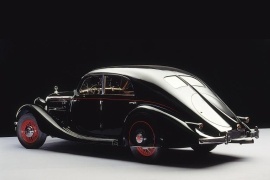