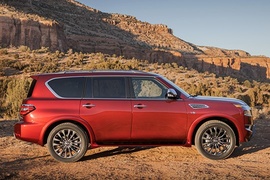 The upgraded Armada was a full-size SUV with a rugged body-on-frame construction.
For 2021, the Armada was highly redesigned, as the previous model had been around for quite some time and started to look dated.

The exterior design changes included a new grilled, a new hood, restyled front and rear bumpers, LED headlights and stoplights, as well as a new exterior color added to the list.

The Armada was fitted with a 5.6-liter V8 engine that cranked out around 400 hp and 394 pound-feet of torque. The thirsty powerplant was mated with a 7-speed automatic transmission.

The full-size SUV weighed around 2.7 tons, however, the 5.6-liter engine handled it really well, with a quick acceleration response. Considering its weight and the size, it’s easy to say that the fuel consumption was no synonym to economy.

Practicality was one of the Armada’s strongest points, as it offered huge space inside. The large SUV could accommodate up to 8 passengers, unless the 2nd row was chosen with captain chairs, which allowed only 7 passengers.

The 3rd row of seats was mostly designed for children, as adults would have felt a little uncomfortable on longer journeys. The 3rd row folded flat to increase the cargo area to around 1400 liters, however, even with the 3rd row up, the Armada still offered more than enough space.

Designed for larger families, the Armada was a safe car, being equipped with the latest safety features available. 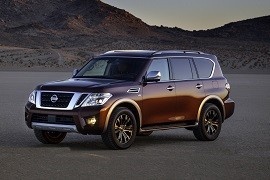 The second generation of the Nissan Armada was unveiled at the 2016 Chicago Auto Show.
It was based on the global platform used for the Nissan Navara/Frontier.

The 2016 Armada was based on one of the most known Nissan’s model, the Patrol. While it wasn’t sold in the U.S., the Patrol was known in Europe, Australia, Russia, and Asian countries. With the second generation, the Armada was kept as a full-size family SUV, but with the rugged backbone offered by the Patrol Y62 model and shares the same chassis with the Infiniti QX80.

It is almost impossible to hide the Patrol Y62 roots on the Armada. The big grille, the headlights, and pretty much the entire vehicle was the same. The vents on the front fenders looked more appropriate for a sports car than on a rugged SUV, but it worked.

Inside, the Armada was available with standard eight seats, or seven with captain’s chairs for the middle row. The interior featured an 8” touch-screen infotainment unit and a 13 Bose speaker audio system. Other standard amenities were the keyless entry and start, dual-zone climate control, and USB ports. The higher trim levels were equipped with front heated and ventilated seats, and heated second row.

For the drivetrain, the Armada was available with only one option: a 5.6-liter V8 unit mated to a 7-speed automatic transmission. It was taken from the Mercedes-Benz due to an engineering agreement and it was also used on the Nissan Navara/Frontier. Worth mentioning that the Navara had the Y61 rear axle system, with coil-springs. And that was used on the Armada, as well. 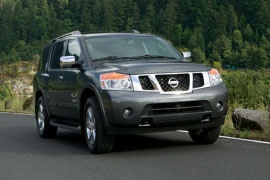 The 2009 Nissan Armada is a facelift of its predecessor.
The 2008 Armada has the similar design of the Nissan Titan and comes with new bumpers, headlights and stoplights from the previous model, while the interior has new trimmings and equipment. It is offered in RWD (Rear wheel drive) or AWD (All wheel drive) options. The 4WD system can be left engaged on dry pavement and includes a low-range gear for off-road terrain. The engine is an upgraded 317 HP 5.6-liter V8 that can be equipped to run on gasoline or E85 ethanol-blended fuel. The 2009MY Nissan Armada has an automatic sequential, 5-speed transmission. 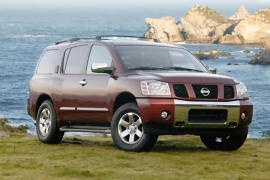 Specially designed for the North American market, the Nissan Armada only came to be known as such in 2005, after the previously used Pathfinder Armada tag was dropped.
The Sport utility conquistador was launched with a choice of a 5.6-liter V8 gasoline engine with a power output of 305 HP. Despite its raw power and great towing capacity (9,100 lbs), the first Armada generation is said to have had serious brake problems. However, all alleged flaws were corrected through the 2008 facelift. This also changed the bumpers, headlights, taillights and some interior trimmings, along with an upgraded engine rated at 317 HP