Almost ten years after the first ever Juke made it appearance and changed the scenery in the compact crossover segment, Nissan decided to unveil its second generation, going for a much more mature design this time.
Unlike its predecessor, the 2020 Nissan Juke looked a lot more mellow from most angles, but it still had a stand-out design among its rivals.

Although bigger and roomier than the first generation, the Juke was slightly lighter, weighing 23 kilograms less thanks to the clever usage of high-strength steel in all the right places. At the beginning of the production, the model was powered only by a 1.0-liter, turbocharged three-cylinder with 117 PS, which was available with either a 6-speed manual or a 7-speed dual-clutch transmission. No all-wheel-drive versions were available at launch either.

For the first time, the Juke was available with the proPILOT techonology developed by Nissan, a package offering electronically assisted steering, acceleration and braking, thus easing driving on the highway and in traffic.

Using the Nissan Connect infotainment system, buyers could efficiently use their devices with Android Auto or Apple CarPlay through an 8-inch touchscreen display. Other features included TomTom maps, Live Traffic and on-board wireless hotspot for the passengers to enjoy the ride at its maximum using their laptops or tablets.
The sound system chose by Nissan for the new Juke was a Bose Personal Plus sound system. It included 8 powerful speakers and two UltraNearfield units mounted in the front headrests. 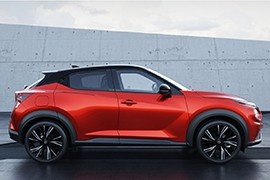