The eighth generation of Nissan’s flagship in the U.S. market went through a mild facelift in 2018. It was unveiled at the Los Angeles Auto Show.

The Nissan Maxima turned from a large sedan to a sport sedan. The car was unveiled in 2015 and it was improved to look like a sport sedan, despite being a front-wheel-drive vehicle. The mass distribution and the power to weight ratio were good.

The 2019 model-year featured new headlights with full-LED. The grille was reshaped and looked more aggressive than before. For the side view, the floating roof design was kept and enhanced with a minor chromed detail on the C-pillar. In the rear, new LED taillights were installed. The 19” light-alloy wheels have received a new design.

Inside, there was a new diamond design for the top trim level. Other than that, the 2019 Maxima offered more safety features in the Safety Shield 360 package. That included the Automatic Emergency Braking with Pedestrian Detection, Blind Spot Warning, Rear Cross Traffic Alert, Lane Departure Warning, High Beam Assist and Rear Automatic Braking. It was a standard fit for the Platinum and part of the SR Premium Package.

Under the hood, there was the same 300 hp 3.5-liter V6 engine mated to a CVT transmission. The steering and suspension were reworked for better cornering speed 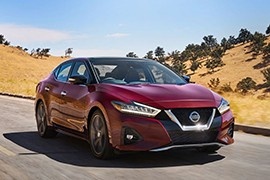