Built on a modified version of Nissan’s B Platform, the NV200 was conceived to offer both commercial and passenger carrying capabilities, bringing lots of space, front wheel traction and a compact but efficient rear suspension system.
Unlike other vans in its class, the seats were not removable when ordered in passenger configuration. The middle row backrest had a 60/40 split to increase versatility and the entire assembly tumbles forward to fold flat against the front seats, while the rear pari fold individually to either side of the loading area.
The interior was packed with storage spaces, pockets and cup holders and there’s also a secret storage space within the upper glovebox compartment, enough to stash mobile phones, a camera or vital documents.
The engine mounted on the Nissan NV200 was a 1.5-liter dCi turbo diesel, that developed 86 hp. The engine was mated to a 5-speed manual transmission.
The car had a maximum payload capacity of 771 kg and had the largest cargo area in its class. It was equipped with big sliding doors to offer easy access to the load area.
The interior was a simple, airy one, with an intelligently placed gear knob. The steering wheel wasn’t offered with any adjustments.
Optionals include a rearview camera, Nissan’s Intelligent Key, power windows and ESP. 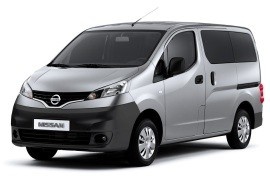