Based on the Astra GTC, the OPC version was the sportiest model in its range and, when it was launched, it was one of the most powerful hot-hatches.
The compact hot-hatch market evolved from power to look factor. When Vauxhall/Opel understood that, it made the GTC model, a sportier version of the Astra. But it did some more! While it had some predecessors with sporty engines, it installed it only on the GTC version, which was more of a coupe rather than a regular hatchback.

On the outside, the OPC took the same bodywork from the GTC version but improved it with a more aggressive body kit. A larger front spoiler, more profiled side sills and a roof-spoiler in the back completed the image of a “bad-boy-racer”. A twin exhaust in the back with chromed tips was offered to amplify the sporty image. Moreover, an option for aerodynamic package added a second spoiler over the roof-spoiler.

Inside, there was the regular Astra dashboard with some OPC badges on the gear-stick lever and the flat-bottom steering wheel. They also redesigned the dials, which were lit in red when the OPC mode was engaged. But the most attention was attracted by the sport-bucket seats with holes in the integrated headrest, like those for race harnesses.

For the drivetrain, the OPC retained the same struts in the front and DeWatt linkage in the rear, but with adaptive dampers. Power came from a 280 hp engine and went to the front wheels via a 6-speed manual and, most important, through a mechanical limited-slip differential. 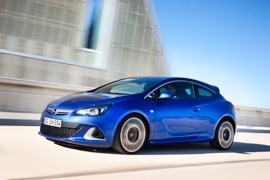