The German car-maker Opel and the French group PSA joined their forces and one of their first products together was the Crossland X.
It was launched at the Geneva Motor Show in 2017.

Under the bold bodywork of the Opel, crossover vehicle lied the same platform as the one used by Peugeot 2006. But apart from some construction requirements, there were few clues that could tell that the two vehicles were related.

The design language remained the same for the Opel family. The headlights shape was inspired by the Insignia GT. The floating roof-line was also seen on the Astra and the taillights resembled the same Insignia Sports Tourer (station-wagon) units.

On the insight, the dashboard design was clearly on the same page with the one found in the compact Astra, with big attention for the infotainment unit installed on the center stack. In front of the center console, under the dashboard, there was a storage compartment for a mobile phone and two USB ports which could have been used to connect to the infotainment system via Apple CarPlay or Android Auto.

Due to its higher ground clearance, the Crossland X was able to cope with some rough terrain or bumped roads. It was the kind of car that could jump over the speed-bumps without hesitation. But since it was only front-wheel-drive, it couldn’t be driven on unpaved roads with the same level of confidence as a true SUV. 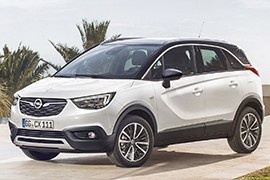