Opel unveiled the second generation of the Insignia Sports Tourer in 2017 at the Belgrade Motor Fair Trade, an unusual location to show its vehicle.
The German carmaker was ready to storm the dealers’ network with the Insignia, and the Sports Tourer was one of the most important versions in the lineup. There were not too many station wagon vehicles left on the market, and Opel tried to convince its customers that the car was more than just an Insignia with a bigger trunk.

The Insignia Sports Tourer showed the same front fascia as its sedan version, with a broad grille that supported a pair of wings and the round badge. At the lower side of the bumper, the carmaker installed chromed accents on top of the fog lamps and a lower trapezoidal grille under the license plate. On the sides, the aerodynamically profiled sills and the sculptured line that crossed the door onto the quarter panels enhanced the car’s dynamic view. Its raked forward tailgate and the roof-spoiler showed an appetite for long journeys and sporty driving.

Inside, the high-bolstered seats promised good lateral support during high cornering speeds, while the “zero-gravity” design tried to keep the occupants rested even after long hours. Its split-folding rear bench transformed the trunk into a cavernous storage area, among the mid-size segment’s biggest.

Opel offered the Insignia Sports Tourer a choice of three gasoline and one turbo-diesel engines under the hood. 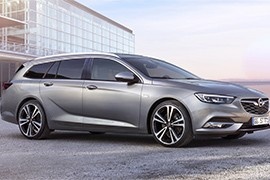