In 2012, Pagani launched the lightest supercar in its class.
Actually, to call the Huayra a supercar would be an understatement since its performance recommends it as a hypercar. The 700 hp and 1000 Nm (737 lb-ft) of torque can sprint the car to 100 kph (62 mph) in under 3.5 seconds and gave it a top speed of 360 kph (224 mph). But not only the sprint and the top speed makes a vehicle a hypercar. It is the story behind it and the technologies involved.

The Huayra was designed in 5 years. The bodywork required countless CAD designs, eight scale models, two 1:1 models and five prototypes for testing. The entire car was drawn and redrawn, with new elements and high-tech materials. The carbon-fiber was not enough. So they made the Carbon-fiber-titanium elements. The front and rear subframes are made of CrMo (chrome-molybdenum).

Inside the high-tech bodywork, in the cockpit, a central console machined from one single aluminum block hosts multiple controls, including those for the heating and AC unit. The high central touchscreen of the vehicle infotainment controls audio functions, satellite navigation. A secondary screen controls vehicle functions and Bluetooth phone.

And there is the engine. An engineering V12 masterpiece. Each is hand-crafted in the AMG factory and signed by the engineer who built it. The 6-liter twin-turbo is crafted to maximum perfection. And it is mated to a 7-speed dual-clutch gearbox which sends the energy flux to the rear. Because that engine doesn’t send power or torque. It sends pure energy. 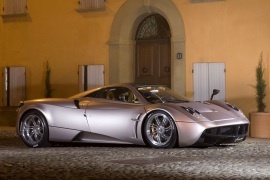