We all know that producing an entirely new car is extremely expensive.
That’s why we got 3 almost identical vehicles, the Peugeot 108, the Toyota Aygo and the Citroen C1.

The Peugeot 108 was available with a 3 or a 5-door configuration. The top of the range model had a fully retractable fabric roof.

There is not much to say about the exterior, as it is simple and good looking for a small car, with its eyebrow led strips.
The interior of the 108 looked funky with the gloss black finishes and the fabric upholstery, and that was not necessarily a bad thing.

The 108 was equipped with keyless entry as standard on the top spec model.

Inside the cabin users could find plenty of storage spaces, as well as a big glovebox that even fit a 2L bottle. The cupholders were conveniently placed and didn’t need much of the driver’s attention to be used.

We could say that the Peugeot 108 was rather spacious for a city designed car and the same applied to the load area where a big luggage would fit.

The best part about the mini car was the reduced fuel consumption, for both the 1.0-liter and the 1.2-liter 3-cylinder petrol engines.

The easy steering and the car’s reduced dimensions made it a perfect match for city traffic. If thinking to take the 108 on the fast country roads, I would say not a good choice. It takes a long time to get to 100 km/h and the engine is rather noisy at those speeds.

Overall, the 108 looked cool and users could choose between 8 different colors , as well as two-tones schemes.

A car that was cheap to buy, was easy to maintain and had a reduced fuel consumption, pretty much a safe choice, right? 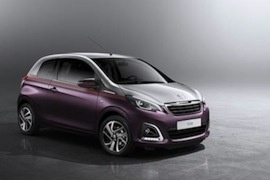