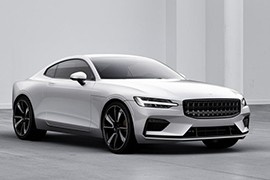 Volvo made a bold move with the high-performance brand Polestar, and the first model was named 1 and was a personal luxury coupe with plug-in hybrid technology.
The Swedish carmaker made a coupe with a luxury GT price and an environmentally-friendly powertrain. Instead of going for a big, V-8 or V-12 engine, Volvo granted the Polestar 1 with an inline-four that powered the front wheels and two electric motors for the rear wheels.

From its profile, the Polestar 1 resembled the Volvo P1800 Coupe. Its long hood and raked windshield formed an aerodynamic shape, while at the back, the flat and short trunk lid left no mistake that it was a three-box sedan vehicle, not a fastback/hatchback coupe. The front fascia featured the Volvo-style headlights with the Thor-hammer design for the daytime running lights and a grille with vertical slats and no Volvo diagonal line. Its taillights showed a C-shaped line like the trunk was placed between brackets.

For the cabin, the carmaker installed a leather-clad interior with carbon-fiber trims. Its instrument cluster was digital, and the infotainment system was typical Volvo. At the front, it featured two high-bolstered seats that promised good side support, but in the back, there was minimal headroom for anyone taller than five-foot (1.52 m). Kids in child-seats fixed in the Isofix system were OK, though. But with a 143 liters (5 cu-ft) trunk, the backseats were better used as an additional storage area for decent luggage.