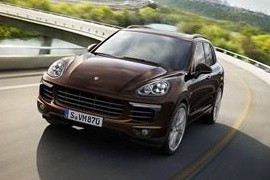 The facelifted version of the Porsche Cayenne was introduced in 2014 and it received a restyled design, new features, and, most important, upgraded engines, such as the V6 diesel version.
Between 2002 and 2010, the Cayenne was sold in more than half-of-million units. It was a huge success for the German car-maker. The V6 diesel version played an important role in this and Porsche decided to keep it in the stable. Along with the facelifted version of the second generation Cayenne, a new V6 diesel was installed.

The exterior of the 2014 Cayenne was enhanced with a sharper design and clear lines. The front fenders, the grille, and the headlights were entirely new. The grille was still divided into three main areas, with the biggest one kept for the engine. The underbody aluminum shield was replaced by a black plastic one. In the back, the roof-spoiler became a standard fit for the entire range.

Inside, the connection with the 911 range was more obvious due to the five-dials instrument cluster and the centrally-mounted tachometer. The new, tall and slim, air-vents were inspired by the Panamera sedan, but on the center console, the buttons from the PTM system were an updated version of those found in the first generation Cayenne.

Under the hood, the 2014 Cayenne Diesel offered an enhanced version of the 3.0-liter V6 diesel unit. It produced 22 hp more than its predecessor while lowering the CO2 emissions and increase the fuel-efficiency. The standard 8-Speed Tiptronic (automatic) transmission helped in achieving better figures. The U.S. version didn’t get the new, 262 hp unit and it was kept with the older, 240 hp one. 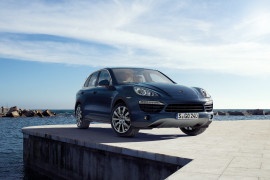 The two-box shape with a curved back was kept. While the first generation started a lot of debates regarding the headlights, the second generation solved that issue but started a new debate regarding the taillights, which looked like they were from a Korean SUV. The car was slightly longer, wider, and higher than its predecessor. All new models shared the new headlight graphics with additional lights at the inside so unmistakably Porsche.

Inside, a particular eye-catcher was the center console that raised up to the front with protruding switches and buttons, giving the interior the character of a genuine cockpit. A 7” touchscreen was placed in the middle of the center console. The dashboard, as well as the instrument panel, featured a brand-new design, expressing that typical DNA of a Porsche, for example through five circular dials and the tachometer positioned exactly in the middle.

The V6 diesel engine was the same unit found in the other Volkswagen group models. The 3.0-liter unit offered 240 hp. It was mated as standard with an 8-speed automatic gearbox. 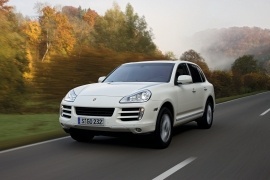 It was the first oil-burner Porsche in history.
The European market asked for a diesel engine and the car-maker had to deliver it to keep the sale up in a struggled market affected by the world financial crisis.

When Porsche launched their first off-road model, the Cayenne, in 1997, the whole world was shocked. Nobody could believe that this could be possible. But they did it right and almost 160.000 units were sold between 2002 and 2007. And, despite all the odds, the Cayenne was a great SUV with real off-road abilities and strong performance.

But the look even if it resembled some other 911 models, it wasn’t completely accepted. For the facelift, the streamlined headlights enhanced the car’s look. The bumper featured the same big air-scoops to cool the engine and the brakes. The DRLs were placed underneath the headlights, and inside of the side-scoops. A new set of rear-view mirrors were installed.

The interior was almost unchanged when compared with the base, V6-gasoline Cayenne. It featured the same seats and standard audio system. It received new colors for the leather seats. The Cayenne was fitted with a power-liftgate as an option.

The engine was a carry-over from the Audi line-up, with a variable turbocharger system and a 3.0-liter displacement. It offered 240 hp and it was tuned to offer more performance. For instance, at hard accelerations, the system disengaged the AC compressor until the engine reached 2500 rpm. The Cayenne diesel was available with an option for an off-road package that added a locking rear differential an air-suspension to increase the ground clearance and a low-gear transfer box.