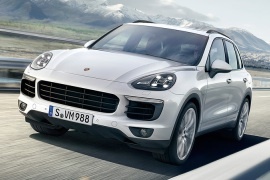 In its quest to lower the CO2 emissions, Porsche introduced a Plug-in Hybrid version for the Cayenne range, a very fuel-efficient sports-SUV.
Between 2002 and 2010, the Cayenne was sold in more than half-of-million units. The German car-maker pushed harder to launch new versions for the Cayenne. The SUV had something for any taste: either an economical 3.0-diesel version, a performance Turbo S and a balanced Cayenne S. But there was something more to improve: the efficiency. And that was a job for the Plug-in Hybrid version.

The exterior of the 2014 Cayenne Hybrid was slightly different than the rest of the range. From the 4-LED daytime running lights and the green brake calipers to the special light-alloy wheels. The rear roof-spoiler was standard as well. Unusual though, even if the German SUV was a plug-in hybrid, it featured four round exhausts.

Inside, the connection with the 911 range was more obvious due to the five-dials instrument cluster and the centrally-mounted tachometer. The new, tall and slim, air-vents were inspired by the Panamera sedan, but on the center console, the buttons from the PTM system were an updated version of those found in the first generation Cayenne. Inside the tachometer, the hybrid badge was written in the background.