After its rebranding from Dodge to Ram Trucks, the carmaker focused on commercial vehicles and pickups, and the 3500 HD Truck was its most potent range.
In 2016, Chrysler’s light commercial vehicle division, born from the Dodge brand, introduced new versions for the 3500 HD series. It was available in a few cab styles, including the Crew Cab version with four doors and a bed in the back.

Ram 3500 Crew Cab featured a new front fascia with a big trapezoidal with a mesh design and RAM chromed lettering. On the lower part, depending on the trim level, the heavy-duty pickup featured a chromed bumper. For the dual-wheels versions, the carmaker widened the rear fenders. Like its predecessor, the 2015 Ram 3500 was available with a gooseneck in the bed for improved towing.

Unlike its smaller siblings, the Crew Cab featured four doors and a wide cabin fit for five. Its flat front seats featured cloth upholstery for the base level and leather for the Laramie Limited. Its instrument panel sported two wide dials and four gauges, plus a TFT display in the middle. On the center-stack, the carmaker installed the infotainment system that supported Android Auto and Apple CarPlay.

The powertrain was the most important part of the vehicle. Ram Trucks offered the 3500 Crew Cab with a choice of three engines. The gasoline Hemi engines were carried over from the rest of the Ram truck range, while the 6.7-liter Cummins turbo-diesel engine was an industrial grade. All gasoline versions were paired exclusively with a six-speed automatic gearbox, while the oil-burner was available with an option for a six-speed manual as well. 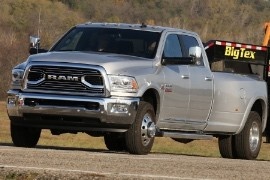