Renault took a gamble when it launched the first Renault Espace back in the ’80s, but gain more when it expanded its MPV range, like the Renault Scenic and Grand Scenic.
In 2016, Renault launched a new generation for the Scenic and, also, a longer version for the Scenic range and named it Grand Scenic. It was an MPV that offered up to seven seats plus some trunk space. But if it was fitted with only 5 seats, the trunk volume was 718 liters (25.3 cu-ft). The extra 24 cm (9.4”) wheelbase was needed to offer a roomier interior and more comfort for the rear passengers, even though most of the time those are placed safely in child seats. The Grand Scenic could have been equipped with a large panoramic glass roof with no cross-member for better light. Renault had a bold move in the segment, offering 20” light-alloy wheels fitted as standard. In the middle of the dashboard, going down on the center console, Renault offered an 8.7” tablet for the R-Link infotainment system.

The exterior had a dynamic look, with a V-shaped grille and angled headlights. It resembled the Captur range more than the Megane. But it sat on the new CMF-CD platform, used by the Renault-Nissan-Mitsubishi alliance for various vehicles, including the Nissan Rogue and the Nissan Qashqai. The Renault Grand Scenic was offered with 6 diesel engines and two gasoline units. It was available with a 6-speed manual or 7-speed automatic (dual-clutch). 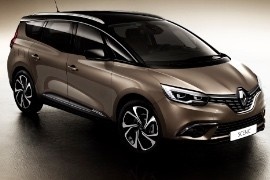