When the Premium market expanded in 2010 after the 2008 world financial crisis, Renault unveiled a car for the up-market called the Latitude.
It was based on the Renault-Nissan D platform, which was used also for the Renault Espace minivan, the Samsung SM5 or the Nissan Maxima. It was quite unusual to see a luxury vehicle from the French carmaker, even though it used to have a premium-car contender during the 80s as well, the Safrane.

The 4.9m (16 ft) car was a front-wheel-drive only vehicle and had numerous luxury options fitted as standard. Depending on the engines, it had either a six-speed manual or a six-speed automatic transmission. It featured an optional all-wheel-steering system, which helped it turn faster on tight corners.

Inside, there is room for five adults and a lot of space in the rear thanks to the big, 2.76 m (108.7 in) wheelbase. It offered the best rear-seats room in its class. The trunk was also big, with its 608 liters (21.4 cu-ft) of space. Remember, this is a sedan, not a hatchback or a station wagon. The five-star EuroNCAP rating was also a plus for the vehicle. If they only would have decided to put a rear independent suspension on it… 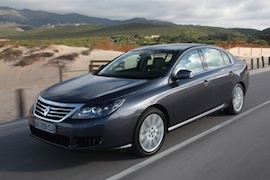