Especially designed for the Indian market, the Renault Pulse was launched in 2011 and started selling in early 2012.
The city car was entirely designed by the Alliance Design Centre based in Mumbai. It had the look of a combination between the Nissan Micra and the Renault Twingo.

Intended for the young, urban clientele, the Pulse shared the platform with the Nissan Micra and was equipped with a 1.5-liter dCi Diesel engine that produced around 63 hp. The Pulse was also available with a 1.2-liter gasoline powerplant.

The Renault Pulse benefited from a 4-year worry-free guarantee and the Renault “Complete Care” service.

The French manufacturer expected the Pulse to sell well, as in Indian, four out of five cars sold were city cars.

The ride quality of the small car was impressive, with a comfortable suspension being able to absorb bumps on the road. Due to the soft suspension, some body roll was noticeable in turns.

A rounded and oval theme of the interior was borrowed from the Micra, with round cluster of buttons on the central console and round vents.

While the Pulse was a small car, the cabin was roomy, with generous legroom and headroom. The trunk size was good and the rear seats folded down. 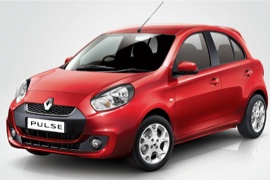