Descendants of the mighty Vikings, the Swedish people, didn’t want to let SAAB die and tried to revive it after the GM era and produced a limited run for the 9-3 Aero in 2013-2014.
After GM sold the Swedish brand in 2009 due to the world financial crisis, the carmaker traded hands a few times before being bought by the National Electric Vehicle Sweden AB in 2012. The new owner had the rights for the brand name but not for the Griffin logo, which belonged to Scania AB. It could produce the 9-3 Aero as well, and that’s what it did. But since the car didn’t meet the European legislation required for a new car, it had to build just 1,000 units for the old continent. NEVC planned to export the rest of the vehicles in China, where the rules were laxer.

The 9-3 Aero featured a slightly changed front fascia, with the SAAB lettering instead of its traditional round badge with the griffin. On the lower part of the bumper, a trapezoidal grille with a mesh design covered most of the apron flanked by two side scoops for the fog lights, with a satin-gray surrounding. A set of silver trims adorned the upper grille. A set of turbine-blade style, 18” light-alloy wheels confirmed the car’s sporty character from its sides. At the back, a dual exhaust peaked out under the bumper.

Inside, SAAB engineers designed and installed new, bolstered bucket seats. More silver trims enhanced the black and tan dashboard look and surrounded the instrument cluster, which was extended over the center stack. These were the main differences compared to the 9-3 Aero from the GM era.

Under the hood, NEVC bought the engines from GM, which used the same powerplant in the Insignia. But, unlike the European sedan, the 9-3 Aero provided just 220 horses, 30 less than the Opel’s mid-size vehicle. 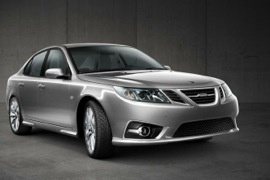