Volkswagen’s Group minivans built its first generation of minivans together with Ford, but for the second generation unveiled in 2010 relied only on its own resources.
SEAT Alhambra was one of the MPVs built by the German carmaker under the Spanish brand. While it kept the original idea, it showed a clear evolution in all of its aspects. From its design language to its underpinnings, it was a completely new vehicle, built on top of a Volkswagen platform.

Unlike its Volkswagen Sharan sibling, the Alhambra showed a sportier look. Its angular headlights were wide and gave an angry face to the minivan, and the sixteen vertical slats on the black grille offered an imposing presence on the road. The front fascia sported a wrapped-around bumper with a broad grille and two side-scoops for the headlights. From its side, the sloped windshield continued the steep hood. Unlike its predecessor, the second generation of the Alhambra featured sliding rear doors. At the back, the angular taillights were extended from the rear quarter panels to the wide tailgate.

Inside, the Alhambra offered room for seven with an option for integrated child seats in the middle row. At the front, the carmaker installed a wide dashboard with a tall center stack for the audio system and the bottom-mounted climate control unit. SEAT designers made an instrument panel with silver rings around the tachometer and speedometer, including the fuel and coolant-temperature gauges on their lower side.

Under the hood, SEAT carried over only the 2.0-liter turbo-diesel unit from the Alhambra’s facelifted first generation, but the 1.4-liter TSI (turbocharged gasoline) and the 2.0-liter TSI were new. The Spanish carmaker provided up to 220 hp for its MPV, which proved that the angry look was not for nothing. 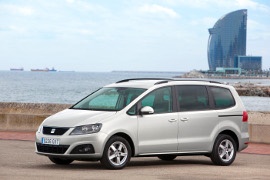