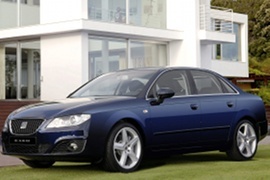 In 2008 the Spanish brand SEAT was under the same roof with the Volkswagen Group.
It was granted to receive the PL46 platform, used for the Audi A4 B7 with which it shared more components.

The SEAT Exeo was launched when the world financial crisis just started. It was a bad moment for the Spanish brand, but the car was already planned and the assembly lines were running. It was a gamble and, somehow, it paid off. Along with other vehicles based on the same platform, it helped the German group survive.

On the outside, it was easy to spot the similarities between the Seat Exeo and the Audi A4, especially on the greenhouse. The front and rear of the car were different, adjusted to the SEAT brand image.

Inside, the Exeo incorporated trims from the Audi A4 Cabriolet and other equipment from the A4. The four-dials instrument cluster and the five air-vents were similar to the open-top A4. The infotainment system was a carry-over from Audi. In fact, the whole Audi A4 B7 assembly line from Ingolstadt was moved to the SEAT factory in Martorell, Spain.

Under the hood, the Exeo featured the new generation of diesel engines. It didn’t use the 1.9-liter TDI units, but the 2.0-liter. For the gasoline units, it used three options: a 1.6-liter, a 1.8-liter with or without a turbocharger, and a 2.0-liter naturally aspirated. All of them were mated to a standard 6-speed gearbox. A 6- or 7-speed automatic was offered as an option depending on the engine and a CVT as well.