In 2017, SEAT unveiled the most powerful version of a road-car ever produced by the Spanish company: the Leon Cupra R.
It was based on the regular Cupra, but it was closer to the Golf R.

After Volkswagen bought the SEAT brand, it started to slowly increase its image on the market. Even though all of them featured powerplants and transmissions and parts from other Volkswagen Group brands, it had its development strategy that involved racing. Its sportier versions were appreciated by its customers. That made them try a new approach, with the Leon Cupra R.

From the outside, the main difference between the Leon Cupra and the R version was the color. There was a choice of three special colors to chose from Midnight Black, Pyrenees Grey (neither with extra cost), and the exclusive Matte Grey. In the back, under the bumper, the Leon Cupra R featured four exhausts for the four-cylinder engine.

Inside, there were few differences, starting with a better look for the sport-bucket seats. They featured an integrated headrest. But the rear bench was just as regular as in any other SEAT Leon, with a nicer upholstery. The instrument cluster featured some copper-like details, just to remind the driver that that is a Cupra (copper) car.

The 2.0-liter engine offered 310 hp for the manual version and 10 hp less if the car was equipped with the 7-speed DSG (dual-clutch) gearbox. 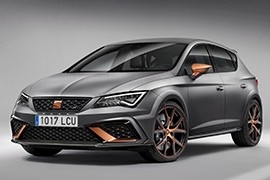