A cross-over that is more of a station wagon and has all-wheel-drive might be better off-road than some 2WD SUVs.
And this is where the SEAT Leon X-Perience stepped in.

The fastest-growing market was the cross-over and SUV. This is why most of the European car-manufacturers tried to build vehicles to fill the market’s demand for such vehicles. The SEAT brand is under the Volkswagen Group umbrella and had access to the MQB platform that was fit for pretty much everything. Some SUVs were built on that and, also, some street vehicles had the same base. One of those vehicles was the SEAT Leon ST (station wagon in their inventory).

The station wagon form is obvious, but it had some modifications that made the vehicle better out of tarmac. For starters, the ground clearance was increased by 15 mm (0.2”). To fill the bigger gap between the wheels and weel-arches, some plastic, off-road style, arches were added. The car featured 17” light-alloy wheels as standard and a set of 18” offered as an option. The car was fitted with full LED headlights.

The cabin of the SEAT Leon X-Perience had better materials and finishes. The standard trim was with high-quality fabric, but Alcantara and all-black leather were offered as an option. The X-PERIENCE logo was placed on the doors and orange stitches emphasize the adventurous spirit of the car.

A big improvement was made to the platform, that featured a four-link independent rear suspension and a tuned Haldex all-wheel-drive system. 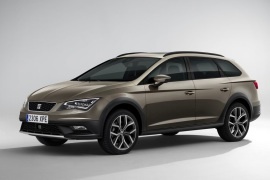